What is seafood allergy?

Worldwide, fish and shellfish play an important role in human nutrition and are particularly popular in certain parts of the world. The strong move to healthier eating habits and the substitution of meat with seafood in the diet has resulted in even greater demands for fish and shellfish. However, seafoods may also be potent allergens in sensitised individuals and cause adverse reactions.

In Southern Africa, there are over 2 000 species of fish, more than 5 000 species of molluscs and 2 500 species of crustaceans. The major edible seafoods that can cause an allergic reaction belong to three groups (see Table 1). The Mollusc group includes three different classes of seafood with delicious species such as Abalone (Perlemoen), oysters, mussels and squid (Calamari). 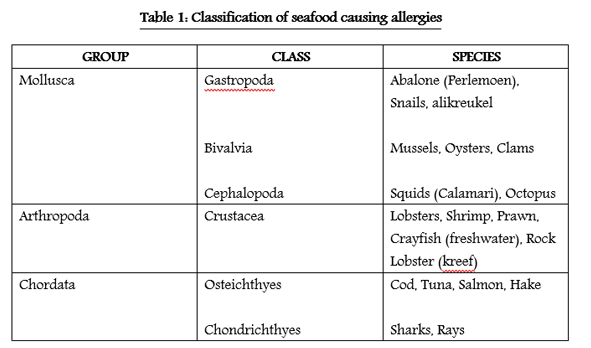 The second group, the Crustacea, includes the rock lobsters (‘crayfish’), prawns, crabs and shrimps; and the third important group of seafood includes all the common edible fish, such as Hake, Cod, Snoek, etc. Very often patients are only allergic to certain species but can eat other seafood species without problems.

However, the evaluation of a patient can be difficult if the adverse reaction to a seafood was caused by a non-allergic reaction. A major cause is the presence of a toxin in fish and shellfish, which produce symptoms like allergic reactions. Among fish species such as Yellowtail, Tuna and Mackerel, scombroid fish poisoning is frequently encountered if the fish is improperly refrigerated or when refrigeration is delayed. In filter-feeding shellfish such as black mussels and oysters, toxins produced by “Red Tide” along the West Coast are found, mostly in late summer. Recently, allergic reactions to a parasitic worm, Anisakis, that is often found in various fish species, has been described in people eating fish, and can mimic a fish sensitivity.

How common is seafood allergy in South Africa?

Currently there is no exact data available as to how common seafood allergy is in South Africa. Depending on regional diets, certain seafoods are more allergenic than others. For example, shrimp allergy is common in the southern USA while fish allergy is common in Spain and the Scandinavian countries, affecting up to 1: 1000 individuals. In addition, international studies have demonstrated that occupational asthma or eczema can affect up to 30% of individuals in the various seafood-processing industries. A recent survey conducted in South Africa by the UCT Allergology Unit indicates that allergy to different mollusc and crustacea species is far more common than allergy to fish. In our study at UCT of 80 patients, we found 44% of subjects sensitive to one or more Crustacea, 38% to one or Molluscs and 18% to fish.

What are the allergens?

Very few allergens of seafoods have been characterised, according to the medical and scientific literature. The best-known allergens in seafood are the Allergen M from cod fish, and the major allergen found in crustacea. In the group of molluscs, very recently a new allergen from South Africa, Abalone (Perlemoen) has been found. All these allergens are very stable and are not destroyed by cooking. As yet it has not been ascertained if some or all of these allergens are responsible for the fact that some patients are allergic to different seafood species in the different groups at the same time (possibly due to cross-allergenicity).

What are the symptoms of seafood allergy?

Reactions are reported to be mostly within 2 hours after ingestion or handling of seafood, or even inhaling cooking vapours. Reactions can also be delayed for up to 6 hours, as has been frequently reported for species of the Mollusc groups such as Abalone and squid. The more common symptoms include skin, stomach, and respiratory problems. Respiratory problems are quite common in sensitive subjects following inhalation of fish or crustacean vapours, such as from cooking.

How is seafood allergy diagnosed?

A precise and detailed patient history and food history is particularly important in the diagnosis of allergy to seafood to indicate if a reaction is really an allergy or rather caused by a toxin in the food. Information regarding the suspected offending seafood species is particularly important, but it fails to provide adequate information. This is often because of the confusion about the common name used for different seafood species in South Africa (e.g. “Rock Lobster” versus “Crayfish”) or deceptive marketing practices (seven different tuna species have been labelled as “Tuna”). The clinical evaluation should be supported by the RAST test performed at a laboratory on a small blood sample. In the case of a negative RAST test result, a skin test with extracts of the suspected seafood species can give additional information. In Southern Africa we have many seafood species which are not found in Europe or the United States. This can mean that commercial tests are not available.

What is to be done?

There are numerous laboratory tests for allergy to different species of Fish, Crustacea, and Molluscs. Not all these tests are commonly encountered in South Africa, as these species are not often consumed as food. However, there is an increasing trend in South Africa towards the use of unusual species of seafoods in restaurants, as well as visits by South Africans overseas where they will be exposed to these other seafood species. 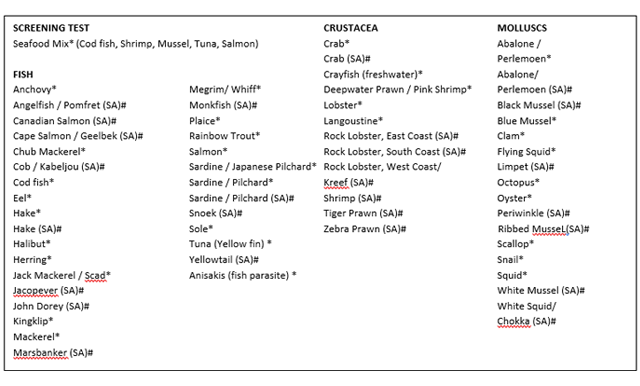